Halloween is one of the best times of the year; it encourages people of all ages to get creative. Whether it's the kids thinking of what they want to be, parents coming up with adorable ideas, or adults getting into the spirit, there is fun to be had by just about everyone!

Our guests continue to amaze us and are, by far, some of the most creative people around. Over the years, we have seen some amazing costumes inspired by Morey's Piers and the Wildwoods. We wanted to share just a handful of the cutest costumes you have ever seen and their stories of how these unique outfits came to be.

Chase, we mean Sunny the Seagull, has been visiting Morey's Piers every summer since he was three months old, and it's his favorite vacation spot. Chase and his family have come every Fourth of July because they get the true feeling of a Beach Getaway vacation.

This year Chase saw Sunny and knew he needed to win one. Chase got to work and strategized his master plan to win one. He played the balloon darts mid-way game and won his beloved Sunny. Fast forward to Fall, his mother was asking what Chase wanted to be for Halloween. She wanted Chase to think outside the box, and Chase knew he wanted to bring joy with his costume. He then had his great idea and asked his mom if he could be Sunny.

They pulled something extraordinary off with some brainstorming, creativity, and a helping hand from Nonna. Nonna grew up making costumes, so she knew what it took to make Chase's idea a reality, and she worked on the details and assembly. We all can be grateful to Nonna for sharing her expertise on achieving this ultimate Sunny the Seagull look! 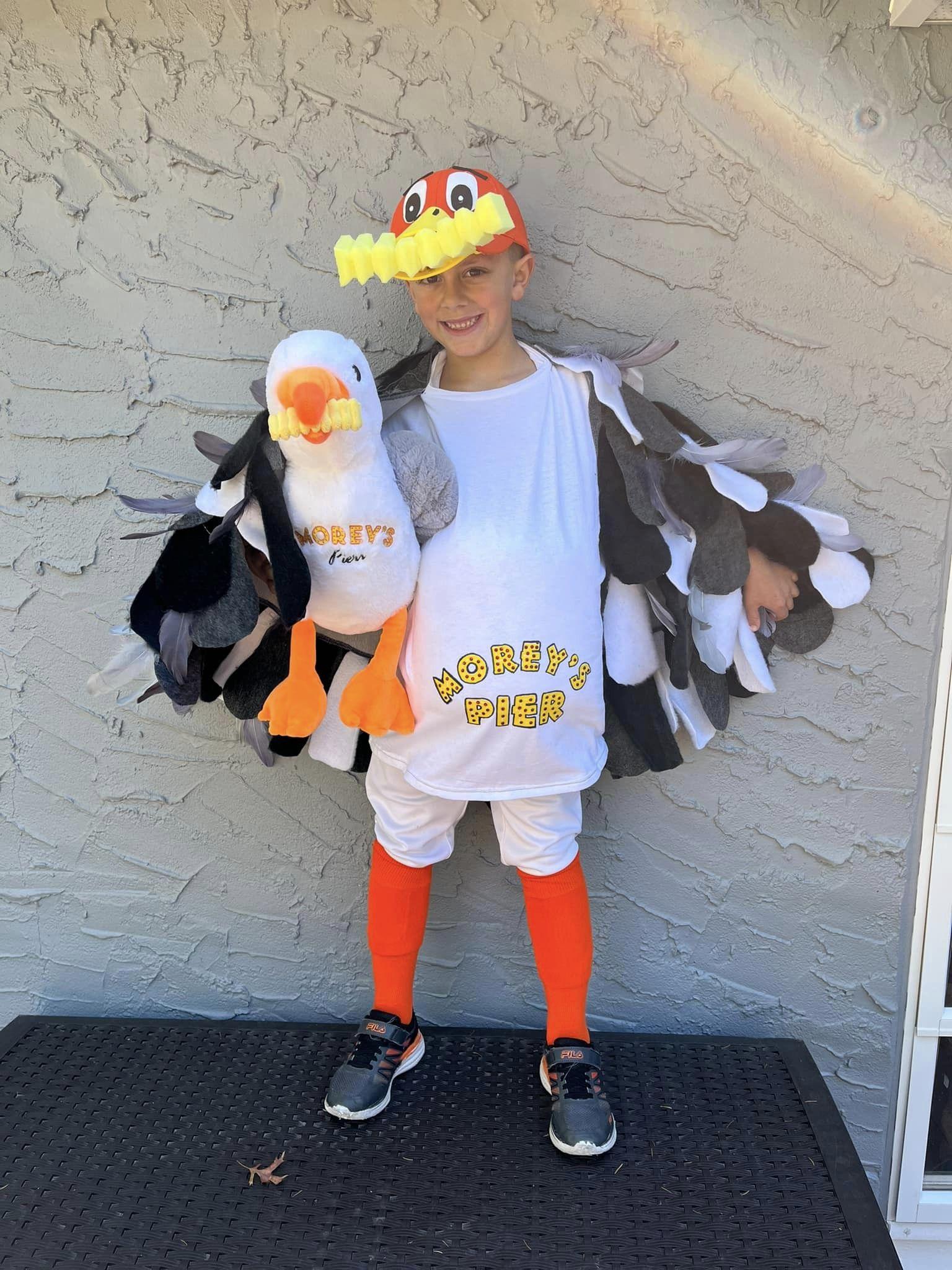 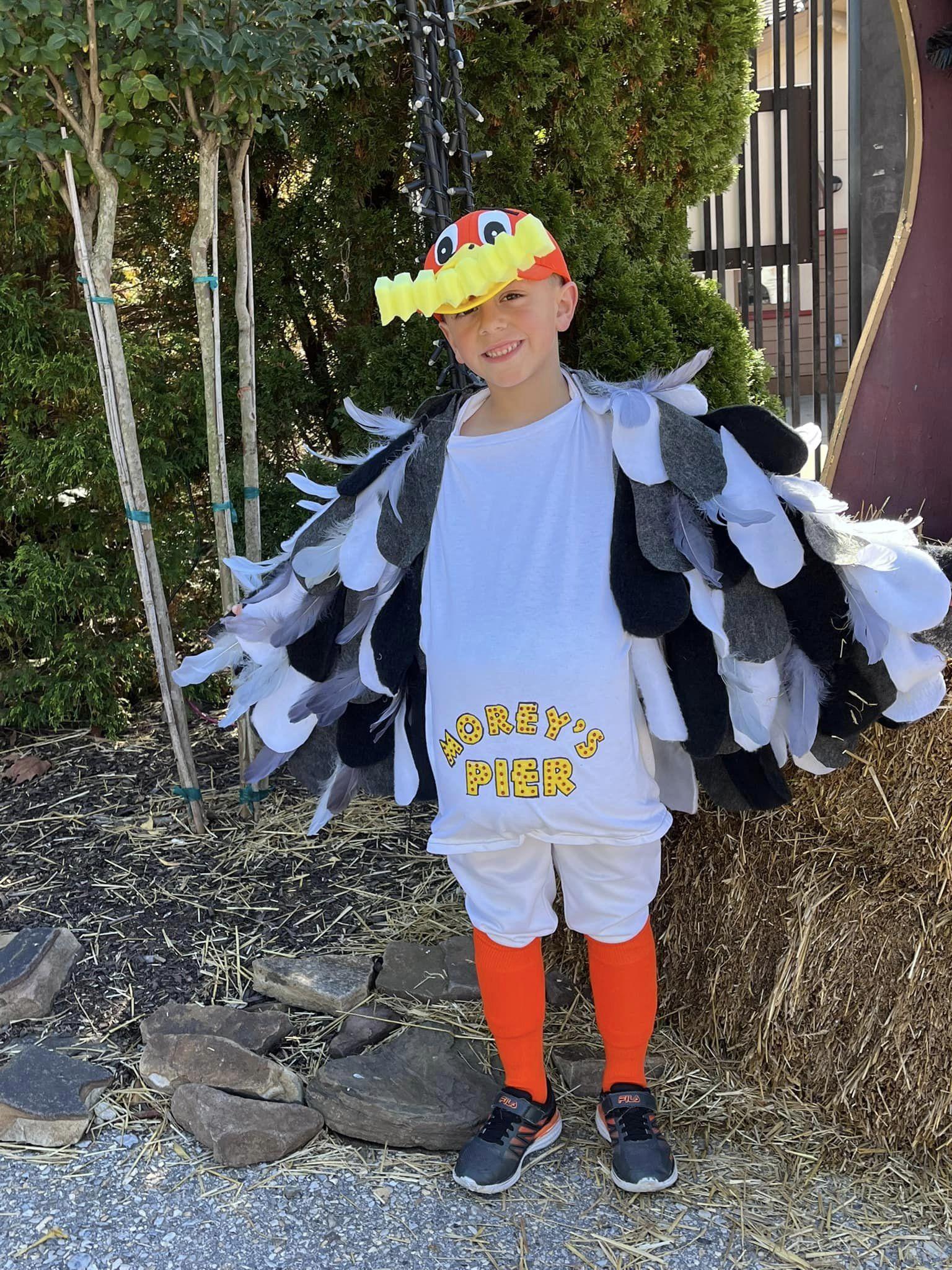 How to Make a Costume Sunny:

The Chest: To make Sunny's chest, they took two white shirts and sewed them together so that they could stick a pillow in between these two shirts to create Sunny's full-of-french-fries tummy. Using a Cricut machine, they made the logo.

The Head: The family was a little stumped on how they could make the eyes and beak; luckily, Poppy stepped in and thought of adding a baseball cap. The top was the perfect spot for the eyes, and the hat's bill made the ideal beak. Then, to top it all off, Poppy carved a sponge into the shape of those delicious Curley's Fries.

The Legs: Orange baseball socks were the way to go.

The Wings: The wings, by far, are the most complex feature of the costume; Chase's Nonna individually cut out each feather. Then, she hot glued all these cut-out fabric feathers mixed with real feathers on a cape. Inside the cape, there were two straps to wrap around Chase's arms, so when Chase's arms moved, the wings moved too.

Chase was excited to make people happy with his costume and simultaneously become a little Morey's famous. Safe to say, Chase met and exceeded his "gulls!"

Now, let's meet Emmie. Emmie's family started brainstorming what she could be for the annual Wildwood's baby parade. They wanted something representative of the iconic Wildwoods, and they thoughts, what's more iconic than the Tram Car and the Runaway Tram?

The family got to work on the costume, and to make it even more legendary, they decided to make Emmie into Gig. Gig has been working on the Tram Car for what seems like forever and is a staple of the boardwalk tram experience. He's truly the heart and spirit of the Tram, so we even modeled the attendant on the back of The Runaway Tram after him, and it's only fitting Emmie played that part of Gig in this iconic costume. 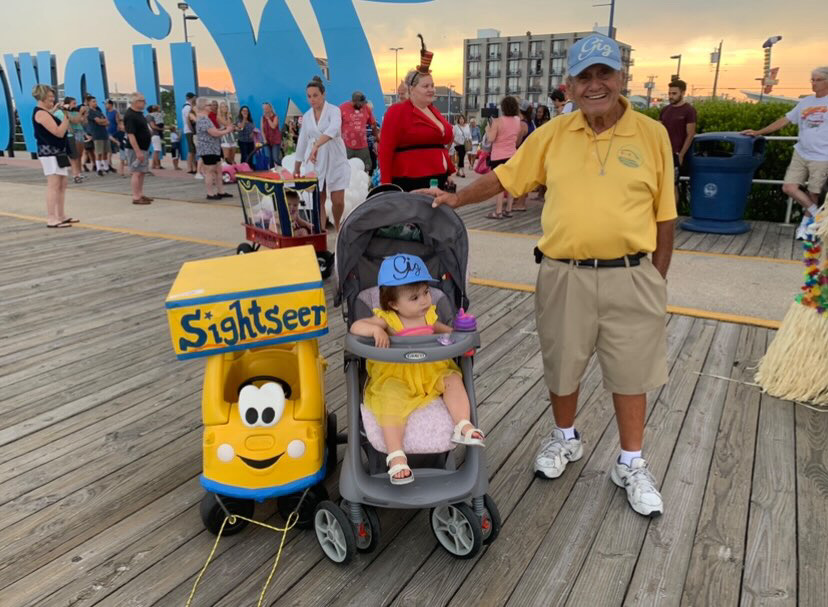 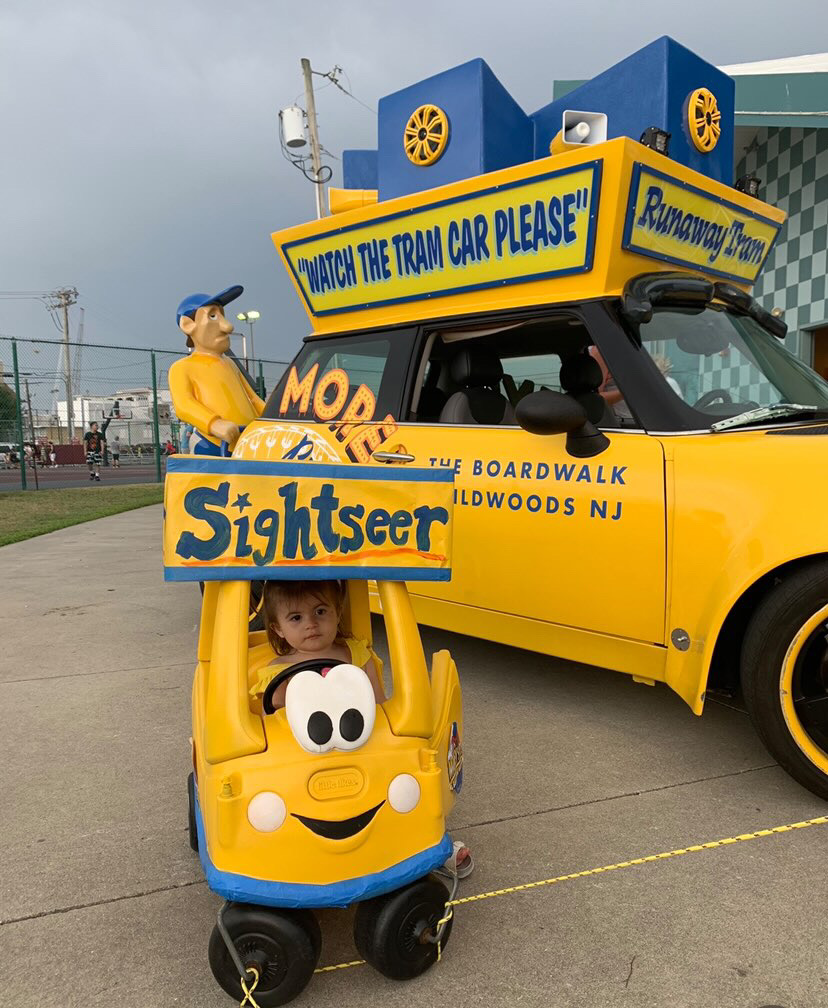 How to Make the Costume Tram:

Gig: For Gig, she needed the classic Gig outfit. A yellow dress represents the yellow Wildwood polo and a blue hat with "Gig" written on the top to match Gig's cap.

The Tram Car: Using an older Fischer Price Car, spray paint, and blue painter's tape, they created the body of the tram car. Then, an old delivery box was covered with paper and painted yellow; they added the famous "Sightseer" by painting it on and adding more painter's tape for the outline.

Emmie was a fan favorite and even a photo with the "real" Gig and Morey's Runaway Tram Car. 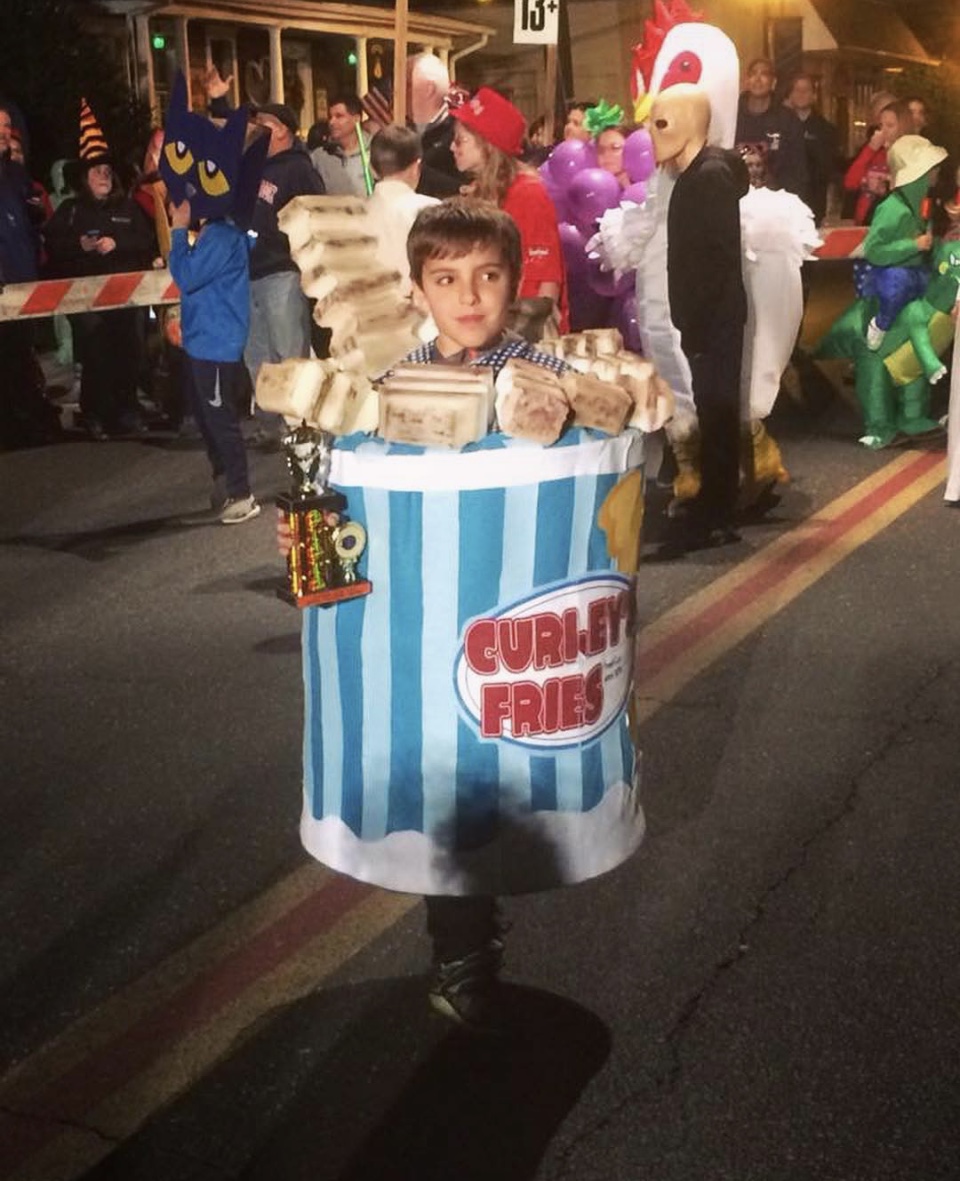 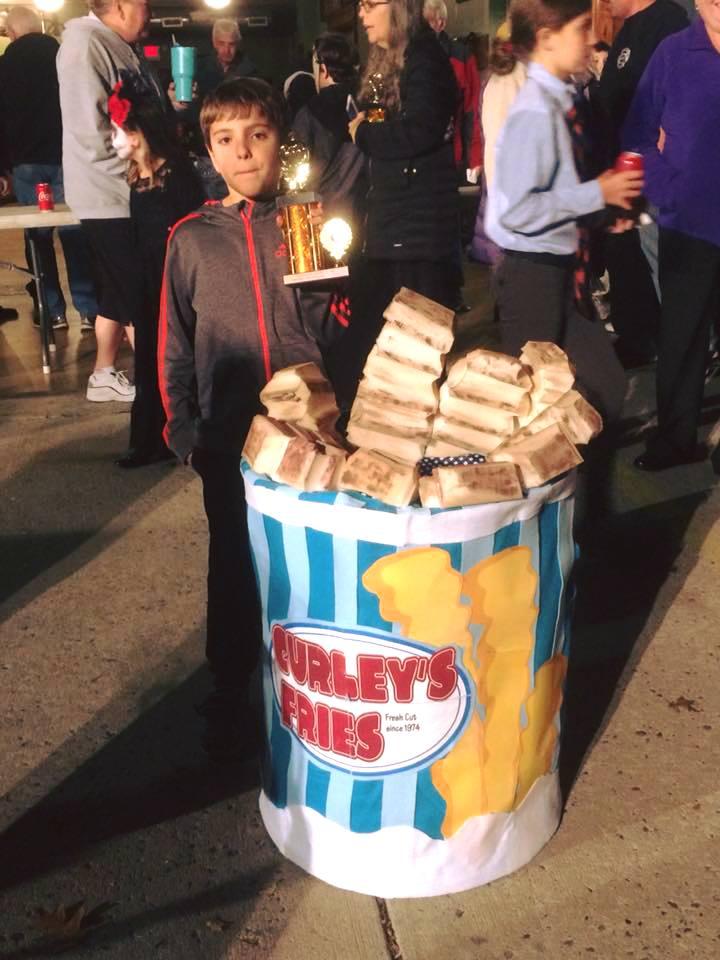 Lastly, we have an outstanding and award-winning Curley Fry Bucket costume. A fan made this costume. Unfortunately, we couldn't get a hold of the family to find the inspiration and how to, but what's more inspirational than Curley Fries? This incredible costume had to make our list. It's not exactly clear how he managed to make such a realistic Curley Fry Bucket and master the look of our famous fries, but the outfit looks good enough to eat.

Kudos to our guests; you always amaze us with your creativity and talent. From the entire Morey's Piers team, we wish you a very safe and enjoyable Halloween!